And yes… it’s about stink bugs.

Stay with me. Because those of us writers who write about B2B “solutions” or other boring or complex things can learn a lot from the vivid description of these gross little guys.

First, I need to have you read it, too. And then let’s break it down, okay? 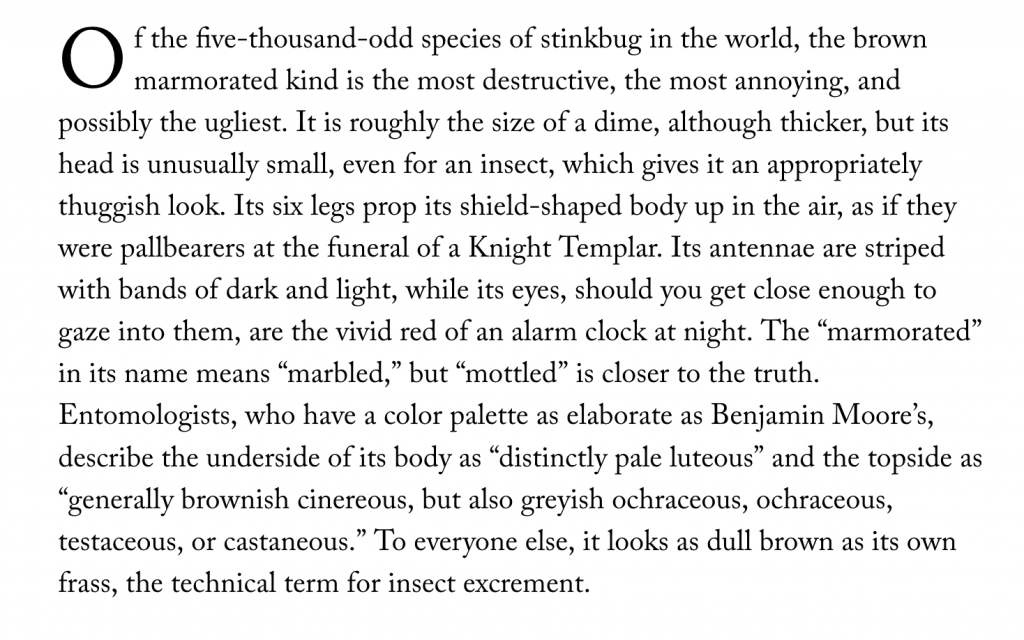 (via When Twenty-Six Thousand Stink Bugs Invade Your Home)

Those of us who write about the unremarkable B2B products, mundane “solutions,” or complicated, boring anythings can learn a lot from this passage.

Let’s break it down:

“Its head is unusually small, even for an insect, which gives it an appropriately thuggish look. Its six legs prop its shield-shaped body up in the air, as if they were pallbearers at the funeral of a Knight Templar.”

A stink bug as a thug is a great image. Can’t you just imagine it in a tiny leather jacket?

The “pallbearers” comparison continues the dark imagery. And anthropomorphizing only its legs, hoisting the decorated body? Genius.

“Its eyes, should you get close enough to gaze into them, are the vivid red of an alarm clock at night.”

Again, the dark and alarming imagery (literally, this time). More genius over the imagined idea of going nose-to-nose with an insect and gazing into its eyes.

But the most relevant for B2B writers are the last two sentences:

“The ‘marmorated’ in its name means ‘marbled,’ but ‘mottled’ is closer to the truth. Entomologists, who have a color palette as elaborate as Benjamin Moore’s, describe the underside of its body as ‘distinctly pale luteous’ and the topside as ‘generally brownish cinereous, but also greyish ochraceous, ochraceous, testaceous, or castaneous.’ To everyone else, it looks as dull brown as its own frass, the technical term for insect excrement.”

The Ben Moore line is solid.

But what I really want to point out is how writer Kathryn Schulz brings in the scientist’s description while also translating it in vivid prose for the rest of us.

Kathryn is not a scientist. But she translates science terms in a simple, direct, forthright manner that elevates the reader’s knowledge… without making them feel stupid. Or stuck in jargon.

In doing so, she becomes the best advocate for the audience.

If part of what you do is rely on your own subject-matter experts for content, look at how Kathryn beautifully interprets for the audience without making herself the center of the story.

This passage is especially relevant if part of your job is to translate subject-matter expert-speak into language the rest of us can understand… and also get excited about!

She paints a picture with imagery and metaphor.

It could use a paragraph break, if you ask me.

But otherwise, it’s damn-near perfect. The full piece is over at the New Yorker.

Previous Post: « The One Thing the Best Career Mentors Do (and an Ode to Mine, Who Did That Very Thing)
Next Post: Slay the Ignosaurus; Change Your Life »