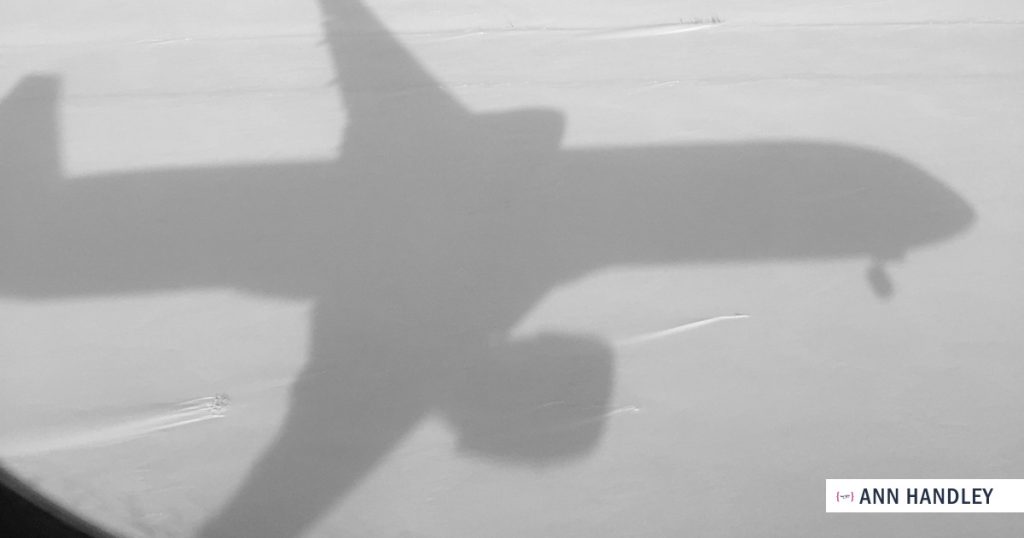 The flight from Boston to Los Angeles takes six hours, during which there is a kind of caricature of intimacy that develops, at least in Coach.

You might not even know the name of the guy sitting at your elbow, but still: You know his choice of reading material; what he drinks with his meal; the way his face, erased of its wakeful composure, slackens when he nods off after lunch.

Every once in a while, your thighs touch, or you get a whiff of his cologne, and it’s all at once completely normal and yet weird: Here we are, two people randomly seated together. We begin the journey as strangers and then, hours later, we part knowing more details about each other than many of our casual acquaintances—even if we haven’t exchanged a single word.

We’re not friends, exactly, but we’re something.

Six hours is a long time to maintain a conversation with a stranger. That is, if you are the type who attempts that sort of thing. I’ve been thinking about this lately because in the flights I’ve taken this winter and spring, I’ve noticed that the world doesn’t come down to, as some psychologists will tell you, Introverts and Extroverts—or Montagues and Capulets, or Sharks and Jets, or Shirts and Skins, or tomayto and tomahto, or whatever.

Instead, the world comes down to exactly two types of people: Those who chit-chat on airplanes, and those who don’t.

In the latter group are those who settle into an airplane seat, buckle up, and immediately pop in earphones and crack open a book. In the former group are those who—as you make your way toward them down the aisle—lock eye contact, smile and nod a silent hello, eagerly stand (“Oh absolutely—here, let me move right out of your way!”) while you contort into your own seat, and then retake their own spot, turn back toward you, beaming, and inquire, “So! Business or pleasure?”

Initially the conversation is easy enough: “In fact I’m headed to Santa Barbara for business…

“No, you probably haven’t heard of anything I’ve written… I work online, on the Internet.”

Invariably, someone hears the word “internet” and assumes that means I am a technologist, a techie, a geek: the kind of person who knows how to develop software, write code, and so forth, when really all I can write are the same words they can, just (I like to think) in a different order.

“Well actually I don’t really know that much about backing up hard drives,” I explain. “See, I use computers in my work, but my work isn’t in computers.”

Here I’ll reveal that I fall into the No Chat category. It’s not that I’m not friendly—because I am—but it’s just that after the initial hellos, and introductions, and explanations of what you are doing on this flight and where you are going, I run out of things to say.

Or maybe I lack the ambition to find other things to talk about—to sift through the murkier parts of my brain in hopes of stumbling into something there worthy of conversation, or to struggle to recall the headlines at the airport news kiosk that morning.

Whatever the case, the ensuing silence feels acute. And for me it carries with it a heavy mantle of social failure, of being somehow neutered of any conversational skills.

At times, I’ve tried a different path: I’ve tried broadcasting a personality that’s overly friendly and outgoing. But soon enough that strategy ultimately presents a different problem that’s even more awkward to resolve: The issue becomes identifying where exactly lie the limits of the relationship.

I’m not talking about knowing when it’s time to physically separate—of deplaning, of retrieving your luggage, of hailing a cab and letting it shuttle you to wherever you need to be. All that happens more or less on its own.

I’m talking about the moment when you make the choice not to share your business card, or your email address, or cell.

The point you reach when you wordlessly recognize that you’ll never likely see each other again, and you both realize that you’re okay with that. You might be chatting along about all kind of things, sharing anecdotes, trading stories, connecting, relating, fully immersed and interested in the discussion. But as much as you might enjoy each other, that moment still comes when one or both of you seems to decide that you’re not enjoying it that much.

Does this sound weird? Maybe it is. Because when I look around an airplane cabin at the end of a flight, I see people going through the motions of saying goodbye.

“Well, good luck—it was nice talking to you!” I might hear someone say to their seatmate, and it makes me wonder, How can they leave it there? How can they not add, “Make sure to drop me a line and let me know how it goes with your biopsy, and how your aunt’s lesions heal, and then we’ll schedule that lunch!”

At times—once or twice, tops—I’ve met someone on an airplane I actually wouldn’t mind having lunch with, some point down the line.

But since that’s the exception rather than the rule, you can see why, in the end, I find it easier to avoid the whole business of chatting with seatmates, and why I have adopted a No Chat policy in most other places, too: anywhere, in fact, that I’m likely to encounter strangers or, sometimes, acquaintances. It’s easier not to connect at all than to struggle with the fundamental questions of friendship every time you open your mouth.

I suppose that struggle is what gives me somewhat of an unforgiving approach on airplanes—what makes me easily riled and annoyed at those seated near me. Put me with a snoring traveler, an antsy baby, even a screeching toddler—a regular pint-sized Maria Callas, as my friend Peter would say—and I don’t mind a whit.

But chit-chatters? No, thank you.

Here are 10 more things I hate about my neighbors (the airplane edition):

1. Eating smelly food. I have two words for this one: Fast food. Wait, one more: Cinnabon.

2. Perfume. Because the longer the flight, the worse it gets.

3. Excessive cell phone use just prior to takeoff. Especially when someone finds it necessary to announce the play-by-play of a runway delay. “OK, so the pilot just came on and it seems like there’s a problem with the jing wibbet, so we’ll be here a while, he says maybe 20 minutes or so. So what’s going on…? What are you guys doing now?”

4. Talking too loudly on a cell phone while we are still (or again) on the ground. If people three rows up turn to look at you, that’s a signal that we can hear you crystal-clear, but shouldn’t.

5. Playing music loud enough for others to hear through the headphones. Especially playing music *just* loud enough, so it gives off a persistent, tinny whine, like a mosquito loitering near your ear.

7. Hovering over your seat, volleying conversation over the seat-back.

8. Asking the flight attendant to repeat food options like this is The French Laundry. They’ve already been relayed once. They are also listed inside the in-flight magazine. And they are nothing special.