Three years ago this week—in January 2018—I decided to start a newsletter.

Three years ago, I also realized a fundamental truth:

The most important part of the newsletter is the letter, not the news.

There were other, secondary reasons I thought of later—some much later.

Does that feel like a ridiculously tall order for an email ferpetesake? Especially that last one?

If I wanted to feel alive… wouldn’t it be less work to—I don’t know—throw my hands in the air and hang out of the sunroof of a speeding vehicle LOL?

So here we are, 3 years later. I’ve written to you 78 times, never missing a single newsletter in my every-other-Sunday fortnight rotation. Not breaking the chain was important to me—more on that in a sec.

So let’s talk what I’ve learned writing a newsletter, what matters in marketing, how to build an audience, and what’s next.

Three years ago, I couldn’t have imagined how deeply necessary connection would be now, in 2021’s babyhood. (Hard to imagine that 2021 is still just a mewling newborn, considering how much drama and strife its little round eyes have seen already. But it is.)

1. Quality matters more than frequency. With some exceptions.

It takes me 8-ish hours to write and publish this newsletter. Is that a lot? I don’t know, really. But it’s how long it takes me.

That’s why I publish only every two weeks: I can’t chew up every weekend. Just every-other.

How often should you publish? I get this question a lot. There’s no right answer. But for most people:

2. ‘Write only when you have something to say’ doesn’t work.

The problem with that approach is that you will find excuses to not write.

It’s an out. An alibi. You will decide that whatever you have a mind to say isn’t very insightful after all, no one will miss you anyway, and you might as well sit on the couch inhaling Bridgerton.

And the problem is—you will be right. No one will miss you, because they won’t have grown to anticipate you. And you won’t have trained yourself to gather and hoard ideas.

The gray squirrel outside my window right now doesn’t sit around on his couch waiting to feel motivated to step outside and scratch scraps of decomposed acorns and other debris out of the hard winter ground; he heads out and digs around anyway.

👉 Set a schedule. Stick to it. Don’t break the chain. I am proud of you, Gray Squirrel, trawling the lawn out there in the cold morning light!

Some of my most popular newsletters (as measured by most read, most forwarded, most commented back) were written when I “had nothing to say.” Like this one. And this one.

3. Looking up from your phone is the best way to find things to write about.

There’s another reason the gray squirrel is the spirit animal of the newsletter writer: She’s a world-class hoarder: She collects and stashes stuff away for when she needs it.

Writers collect and hoard ideas: seemingly unremarkable things that happen throughout the day, conversations overhead in line at the post office, a side comment by a colleague.

Look for connections between those ideas. Play out something you witnessed to a preposterous end.

Look up from your phone. Snap to. Pay attention.

👉 Creativity comes when you are being pre-creative, as James Altucher says. Take intentional steps to notice things.

4. The fuel for your newsletter is not technology; it’s writing that’s entertaining + informative.

None of the rest matters if you don’t get the writing right. The tech matters. The optimizing is important. But the writing matters above all.

The reason people will read it, love it, refer it… hinges on just one thing: What you say, along with how you say it.

👉 Is that 2 things? Well, is a package of 2 Reese’s Peanut Butter Cups two candy bars? Or is it one really superior one?

5. An email newsletter is not a distribution strategy, it’s a relationship-builder.

When I talk about the importance of writing, I’m not talking about elegant prose and artful imagery. I’m talking about your honest voice. Your personality. Your point of view. That’s what I mean by “letter” vs. “news.”

You are showing who you are and how you think—not just what you think. Because although the second might attract an audience, it’s the first two that will build a long-lasting relationship between reader and writer, between you and me.

👉 BTW: Your voice can take a while to emerge. That’s OK. Think about the first seasons of your long-running favorite shows: At first the characters can seem wooden and weird; it takes a while for the actors to spread out and fully embody their roles.

The same is true of writing.

6. Create response triggers. (Or: How I do unscalable things.)

I frequently invite you to respond to each newsletter issue I send.

In the Welcome email I sent you when you signed up, I invited you to share why you subscribed. (If you wrote to tell me, I wrote back to say thanks.)

That is me—it’s not a bot or an assistant or a script.

Why do I do that? Doesn’t it take a lot of time?

Not really. The hour or two a week I spend corresponding with readers like you often leads to opportunities. And even when it doesn’t, it helps me understand what you value from me.

Growth often focuses on scalable things—automating, optimizing, and polishing the human fingerprints right off the thing.

But when you do the opposite, it pays off in surprising ways. 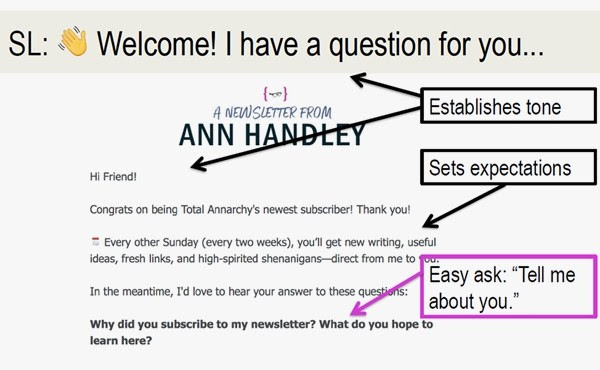 7. Word-of-mouth is the most important driver of subscriber growth.

This newsletter has gained subscribers in 3 important ways:

Other notable sources of growth (in order): (4) guest posts elsewhere; (5) social promotion on my own platforms; and (6) people who find me through my books.

I haven’t done any paid promotion. But this piece on how the Morning Brew grew exponentially includes some solid advice on paid promotion to fuel subscriber growth.

So that’s what’s worked for me. But, as in life, there’s no one-size-fits-all. Take what’s useful. Leave the rest.

Let me know how this helps you!

Almost forgot… I did tee this up, didn’t I? I have plans for making the newsletter more useful and helpful for subscribers. I’m going to send you a short survey to that list that will help me work out 2021 plans. Stay tuned!

Previous Post: « How to Write a First Draft of Anything
Next Post: TikTok with the Best Writing Advice (No Really) »