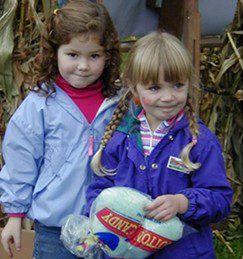 My friend and colleague Shelley and I are taking our two girls to a company “junket” we’ll both be attending next month in southern California. (We’re calling the two of them the MarketingProfs “Web 3.0” team.)

The girls are 9 and 11 and live, respectively, in Texas and Massachusetts. Kinsey (the 9-year-old) and Caroline (age 11) have never met in person. But last week, in anticipation of their trip, they started chatting with each other on Skype, the internet phone and chat software.

Their instant messaging quickly evolved into free Skype-to-Skype calls. This past week, they’ve spent some time jointly playing games at various kiddie sites (like Webkinz, Disney and Club Penguin) and chatting all the while—about the game, but also sharing their favorite subjects at school, talking about their pets, what their moms are making for dinner, and so on. In other words, they’ve been becoming friends.

It’s hard not to witness them at their parallel play and think that were it not for time and distance, they’d be squeezed onto the same chair in my office, head-to-head and pouring over Webkinz décor catalogs.

All this is cute and sort of cool. Skype is still a little known and geeky enough technology that I admit that I get a bit of a charge out of seeing my kid cutting her few remaining baby teeth on it. (She is the only kid in her class with her own Skype account.)

And it’s wonderful to see her connecting with an otherwise stranger—confirming that, deep down, little girls everywhere are still just little girls. Maybe it’s not quite a moment where we’re inspired to link arms and sing the chorus of “We Are the World,” (“We are the future…”) but it’s close, dammit.

The real eye-opener came when Caroline’s friend Lorimod, who lives a few doors down, called on the house phone to ask her to play on Saturday afternoon. Caroline wanted to go, but she was torn. Cradling the phone to her stomach, with the Skype headset still around her neck, she said in stage whisper, “But Mom… I’m playing with Kinsey!”

I’m sure there are several ways you can interpret this scene. I can think of two:

Contrast Caroline’s perspective with a story I read a year or so ago in the Washington Post, “Social Isolation Growing in U.S., Study Says.” Poynter’s Al Tompkins commented on it when it appeared, saying, “This story says something really sad about the times in which we live.”

According to the study, one-fourth of Americans say they have no one with whom they can discuss personal issues. “That is almost triple the number who said the same thing in 1985. How many people would you say are in your closest circle of confidants? The national average, now, is two,” Al writes.

Adds Lynn Smith-Lovin, a Duke University sociologist who helped conduct the study, “There really is less of a safety net of close friends and confidants.”

“We know these close ties are what people depend on in bad times,” she said. “We’re not saying people are completely isolated. They may have 600 friends on Facebook.com and email 25 people a day, but they are not discussing matters that are personally important.”

Here’s what I wonder, as I watch my own kid navigate the uncharted waters of a new kind of social order: Are social ties really fraying? Or are they just shifting, and reweaving themselves in a different pattern?

We are living in interesting times, in which the very definition of “social circle” is shifting, changing shape and expanding. Our “friends” don’t fit the typical mould, anymore, maybe, but they are friends nevertheless. It feels shortsighted to suggest otherwise.

At least, that’s my take. But what do you think? Is your world a richer place? A lonelier place? Or a combination of the two?

Me and TomTom—True Love Always

Around Christmas, I met TomTom. We've been inseparable ever since. TomTom, if you don't know, is a portable GPS navigation...