This is a story about the best Call To Action (CTA), and why it works so well.

In my two decades of marketing experience, this is one truism I’ve learned: Some of the best marketing ideas are first proposed as a lark. A joke.

The crazy off-the-wall concept that someone works up the courage to share with the group. The punts that come in the final hour of a brainstorm. The flash of half-drunk inspiration. (Like this. And this.)

Why is that? Because good marketing requires fearlessness.

You have to be willing to veer left toward the bumpy road of unknown when the rest of the world is veering to the worn-smooth right. And that’s inherently risky. So it’s safer to serve up an idea when it’s couched with a ha-ha yeah-no I was just kidding.

Same is lame (to quote Super Mario and Jay Baer). Expected gets overlooked.

When I see great marketing, I try to imagine the person who shoved the idea into the spotlight.

That willingness—that gumption to push the crazy idea, fearless neck stuck out—is part of why I love marketing. It’s the thrill of when a crazy idea hurls itself off a cliff and sticks the landing.

You see two calls to action when you get to North Carolina’s Currituck County Economic Development home page. The button on the left is standard; the one on the right is extraordinary: 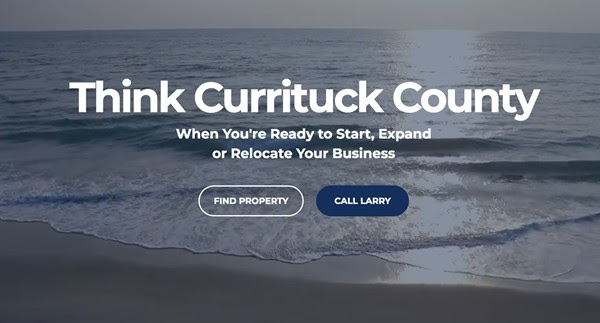 Let me restate that:

The “Call Larry” CTA would be extraordinary for almost any company. But this Larry button is extraordinarily extraordinary. Because this is a county government agency we’re talking about. And “Larry” is Larry Lombardi, Currituck’s economic development director.

“It’s a sea of sameness in that category—nearly every municipality talks about ‘quality of life,’ their outstanding workforce, and state and local incentives to get companies to move to their location,” says Douglas Burdett, who runs a marketing agency in Norfolk, Virginia, just 36 miles north of Currituck.

Doug worked with Currituck on its new-site launch, and the idea was suggested (you guessed it) as a joke. (Idea, meet cliff.)

I picked up the phone and I called Larry. He answered.

He told me he gets about 15 calls a month from people, most of whom aren’t just randos like me. Larry’s last call was from a woman asking about how to get a business license.

“I’m happy to chat,” he said. “Even if it’s not an actual opportunity, I might learn something.”

Why should Larry and his CTA matter to you and your business? Let’s break it down.

The copywriting. Look, you can read every blessed blog post on the Internet about best practices in copywriting and call to action buttons. Not a single one is going to tell you to write “Call Larry” on your CTAs. Not. One.

👉 The most effective copywriting reflects who you are, not just what you sell.

No one calls anymore—it’s old-school. Takes too much time. Too random. Too interruptive.

You know who wants you to interrupt him? Larry.

In part because it builds trust and affinity. And precisely because it is folksy and old-school—not unlike Currituck itself.

👉 From Larry: “People know what you do. You have to sell them on who you are.”

The CTA copy doesn’t thrive in solitary confinement. That “Call Larry” button in isolation would come across as weird. It works because it’s expressed implicitly and explicitly across all that the agency does.

The back of Larry’s business card reads “Call Larry.” The agency’s collateral and display ads feature the same copy and approach. The newsletter is (you guessed it) a literal letter from Larry.

👉 No one thrives in isolation. ThinkCurrituck.com is one of the highest-traffic websites compared with its competitors, Doug said.

What’s a crazy idea you’d suggest as a joke?
What is your Call Larry opportunity?

Previous Post: « How to Not Be a Jerk at Work
Next Post: A Writer’s Hierarchy of Needs: How to Do Our Best Work »