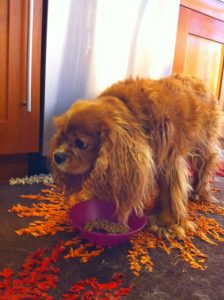 1. Preference to remain someplace safe — lurking in the shadows, under a bed — while the other dogs (“idiots”) chaotically dance around and drool at the ping of kibble hitting the bowl. Rationale: You can get stepped on, drooled on, or accidentally eaten when Maisy mistakes you for a bit of sausage (it could […] 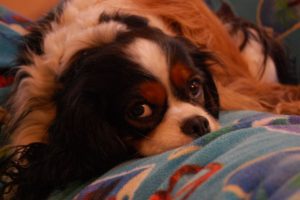 My little dog Abby lost her right eye yesterday. “Lost” is a funny term for it—implying that she misplaced it somewhere and can’t for the life of her remember where, like you might car keys. Maybe, in time, “lost” will be enough to define the visceral brutality of what happened. But not quite yet. Then […] 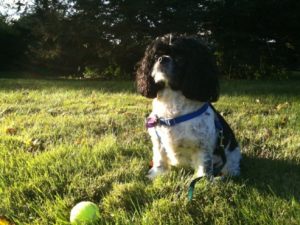 This morning I got an update on a former foster dog — a Cavalier King Charles spaniel who lived with us two years ago, from just prior to Halloween to just before Christmas. The dog had some kind of skin condition and arrived hairless, itchy, raw, reddened and miserable. He was about as sad as […]

My childhood friend Ron Ploof was so inspired by the pathos of Gigi’s story that he adapted it to the small screen. I think he did a fine job with it, and I particularly like the tweak of the ending. So what do you think? Gigi Spies a Green Tomato from Ron Ploof on Vimeo. 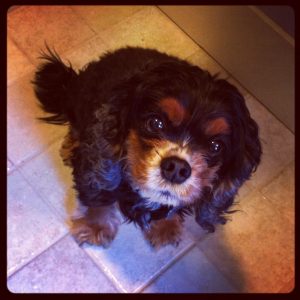 The stage: A small wooden deck with sturdy balusters, overlooking a vegetable garden in late season. Enter main character: Gigi, a 6-year-old Cavalier King Charles Spaniel. It’s clear from her saunter that Gigi is unhurried and uncomplicated, and her portly figure implies a dog who is enthusiastic about her meals. Suddenly, Gigi sees something that […]