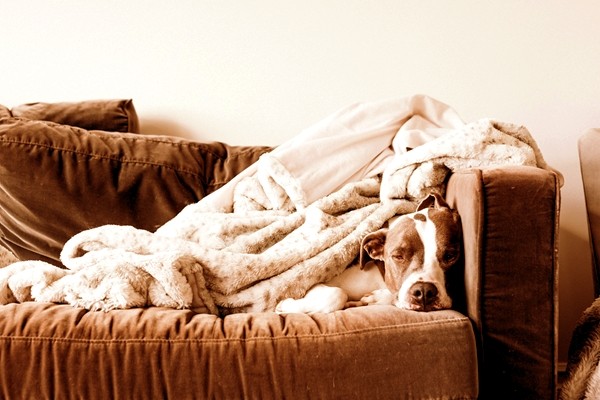 A version of this story on the Power of Copywriting appeared in Total Annarchy, my fortnightly newsletter that helps you be a better writer, storyteller, marketer. Get it in your inbox; you’ll love it.

How do you sell two used couches upholstered in the exact, unfortunate color of the poop emoji? 💩

That had been my challenge since last weekend, when I swapped out the two brown couches in our Maine cottage for a smart, gray, sofa-and-loveseat duo with a mid-century modern vibe.

Maybe it was my imagination… but they seemed a little cocksure, that trim mid-century pair, sliding efficiently into spots once occupied by their dumpy, dung-colored cousins.

(The old brown couches ended up against the far wall, looking… I don’t know… forlorn? I would say they reminded me of two old dogs watching their family welcome a new pup… but that would be ridiculous, wouldn’t it?)

But anyhoo… life goes on.

My son Evan wanted to put the brown couches on the curb with a “FREE” sign. But this is a classic Marketing challenge, isn’t it?

How do you sell something with enthusiasm when you wouldn’t be the ideal buyer for it?

How do you acknowledge the in-your-face reality of that poop-emoji brown?

Here’s the first ad I wrote for the listing on Facebook Marketplace:

PUMPKIN SPICE COUCHES x2: Two upholstered gently used loveseats in a rich caramel hue. Deep, comfortable seating. Generous arm with sturdy back pillow supports. Perfect for binging Netflix or cozying up with your bestie on a chilly autumn night. From a smoke-free, pet-free seasonal cottage. Sad to see these go! $95 for the pair. These won’t last!

Before I share the results… (scrollers: contain yourselves!), let’s live-comment on what’s happening here.

1. Trigger at least two senses—sight, smell, touch, taste, hearing. Invite your reader to imagine the couch with more than one sense.

Not just what it looks like (sight). But what it feels like (deep seating; generous arm, sturdy on the back). And what it smells like: “Smoke-free, pet-free” is code for “doesn’t stink.”

2. Steer clear of clichés. Don’t say “sink into this couch.” Though that brown couch might be sink-in-able, the feature is implied. Less is often more. (In copywriting. In life.)

3. Tell a story. A “story” in a six-sentence Facebook ad means you invite the reader to imagine how cozy they’ll be, snuggled up with their bestie or a blanket.

4. Use familiar pronouns. Not A bestie: YOUR bestie.

To be honest, I struggled with whether to include the these won’t last line… is that selling too hard…? I brought it before the equivalent of the Copywriting Supreme Court in my head.

Verdict: It stays. It conveys the right tone.

6. Not free. “FREE” was a turnoff in the first ad, because FREE signals NO ONE WANTS YOU, dumpy poop-emoji couches!

When I put a not-crazy price on these two, I actually got more inquires—not fewer. Why? The perceived value was higher. Humans are weird.

7. You are not your customer. I admit it: I don’t like brown. Look through someone else’s eyeballs: Maybe our poop-emoji brown is their pumpkin spice caramel macchiato.

8. A little humor goes a long way. This ad is NOT overly clever, and I’ll be the first to admit it. I actually thought of a million other ways to write this ad:

> the personal ad approach (“Two dignified older gentlemen seek a welcoming home…“)
> a Starbucks order “Belly up to the counter: Two pumpkin spice caramel macchiatos could be coming your way!”
> the plaintive appeal for a new home written in the first-person by “Brownie the Couch” (Literally LOLing at this one)

But we’re here to sell couches, not win copywriting awards for cleverness. So I used a little humor in the headline to catch attention. But not so much that the audience would suspect they’re the butt of some joke.

INQUIRIES: 8
ROI: A text from my son yesterday morning as he watched the poop-emoji couches being driven away in the back of a flatbed trust: “OMG Mom. I can’t believe someone paid $100 for those couches.”

* Thanks to Andrew & Pete for the inspiration.

Previous Post: « A Writer’s Hierarchy of Needs: How to Do Our Best Work
Next Post: How This Marketing Program Cleaned Up: A Case Study in B2B Storytelling »