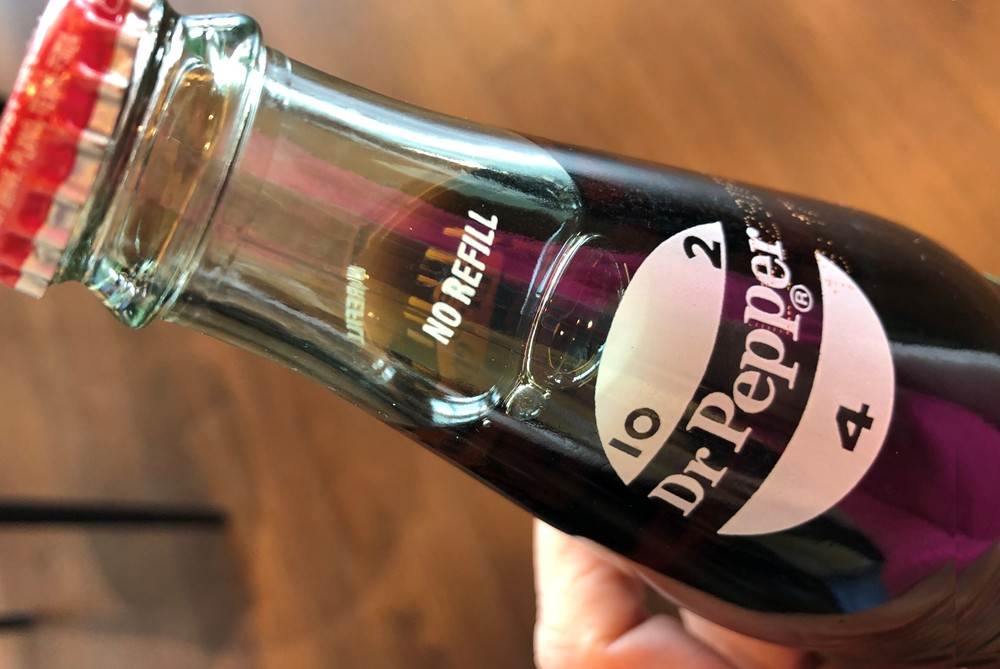 I’m in a meeting in a Dallas, Texas, hotel. The drinks station at the back of the room has a few fun retro bottles of Dr Pepper.

And most curiously, three numbers in an implied triangle formation: 10, 2, 4. As in the above photo.

It turns out that the numbers are a reference to “Drink a bite to eat at 10, 2, and 4,” a marketing campaign inspired by a 1920s study by Columbia University’s Dr. Walter Eddy, who found that a person’s blood sugar is lowest around those hours.

And because the first 5-hour energy shots and green smoothies hadn’t yet been Instagrammed, Dr Pepper literally prescribed itself three times a day as a way to avoid midday sugar crashes. The campaign launched in the 1930s and ran for roughly 20 years.

I learned most of that from a hotel banquet server named Steve, who saw me studying the bottle like I was taking an eye exam. “It was invented down the street,” Steve said. This is Texas, so “down the street” turns out to mean 1.5 hours south, in Waco.

The rest I picked up from the Dr Pepper Museum. Like the fact that Dr Pepper is the oldest major soft drink brand in the country (one year older than Coke).

And that the 10-2-4 slogan was for a time combined with “Old Doc,” a trademark Dr Pepper character with a monocle and top hat. Old Doc was killed off decades ago, a mercy considering it’s been a rough 2020 for trademark characters with top hats and monocles. (#RIPeanut)

Also that Dr Pepper is sold as Dr. Foots in The Netherlands.

Because you’re from Texas. Or you’re a Dr Pepper fan. Or you are Steve.

But it was new to me, probably in part because the 10-2-4 sequence hasn’t appeared consistently on Dr Pepper cans or bottles since the 1970s. (Outside of short runs of retro bottles sold in central Texas or on the Internet.)

Yet the legacy lives on. And its inspiration remains 2020 modern.

The 10-2-4 campaign created a kind of rallying cry around the Dr Pepper product. Not only by putting Dr Pepper in the context of your daily life.

But also by creating a 10-2-4 ritual; a kind of orthodoxy and communion around its product.

This campaign is more than just big-brand CPG advertising:

Instead, it’s “we are the kind of people who drink Dr Pepper and here’s when and here’s why.” It’s giving fans a reason to identify, and (this is important) a trigger to participate.

Like Campbell’s did with its Green Bean Casserole effort.

Like Starbucks does with its annual Pumpkin Spice Lattes.

Dr Pepper made an appointment with its audience. It built marketing momentum with a specific, self-identifying community, as a way to fuel deeper brand affinity.

And not in an obvious way—but in a kind of insider-y shorthand right on the side of the bottle.

Question to you: What’s your version of the 10-2-4 prescription? How are you building momentum in 2020?

👉 👉 👉  P.S. If you are a marketer at the Dr Pepper Snapple Group Inc., please please please resurrect the 10-2-4 campaign. With some small tweaks, it’s tailor-made for the social media era.