Has the pandemic made us more creative?

I’ve been wondering this lately… Have the uncertainty and randomness of the past 18 months made us more resilient—determined to get through the insanity, to roll with the punches?

And does newfound resiliency make us more comfortable taking a risk here and there?

And doesn’t creativity require an element of risk?

(^^ actual transcript from 3 AM Brain, lying supine and actively ignoring Right Shoulder, who since rotator cuff surgery acts like a real jerk at night—keeping everyone awake)

I checked to see what the Google Gods might say on it. From Dr. Michael Bloomfield, a creativity expert and researcher:

If you look upon uncertainty as an opportunity for discovery of novel things or ways of looking at things, as a driver of randomized divergence, you can reframe uncertainty as a positive and constructive form of fuel for creativity. (via DigiDay)

(Sweet Cheezits, do academics get paid by the number of words in a sentence…? Or are periods really expensive in University bookstores?)

You might think that the place to go to answer this “is Marketing more creative now” question would be the go-to big brands. The ones with big teams and big budgets that kill it at everything digital.

Like Zappos.
American Express.
Every single pixel Ryan Reynolds has ever exhaled into digital glory.

Let’s take a look at 5 examples of brilliant creative on a tiny budget… from the unlikeliest of unlikely sources.

Curbside Larry is here to sell you books and DVDs for the all-time low price of FREE FREE FREE…!!! 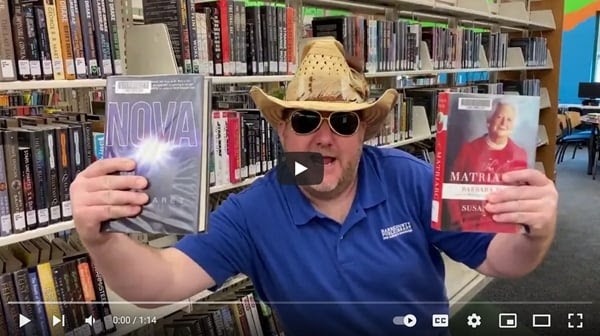 Mild-mannered library staffer John Schaffer transforms into the hat-wearin’, book-totin’ Larry—a parody of a fast-talking huckster who looks like he moonlights as a used-car salesman, instead of being the unassuming, well-spoken librarian he actually is.

John debuted Larry in the spring of 2020 to explain Covid-19 protocols. Since then, he’s become a fixture on the social channels as well as a viral phenomenon outside the library. His Twitter debut video has 1.2 million views. He’s appeared on Good Morning America. And Texas Monthly ranked Curbside Larry as one of the Most Iconic Local Legends.

If These Books Had Kids
Dover Public Library (Dover, NH)

This one is truly inspired: The Dover Public Library takes the TikTok sound I’m at the Pizza Hut I’m at the Taco Bell to answer the important question: What would happen if these classic book titles hooked up and had a baby…? Like: Who would be the lovechild of The Very Hungry Caterpillar and Star Wars?

Not exactly plot-driven. Instead, an hour’s worth of background library sounds produced for people who missed the vibe of working or studying in a public space. It’s one of the most viewed videos on the library’s channel.

This entire library TikTok is so much fun. This example uses Ursula from the Little Mermaid to make reference desk librarians approachable and relatable and kinda cool.

Video is time-consuming. Scary. Hard. Or so libraries (and a lot of us) think.

But then, closed or much-quieter libraries found themselves trying to reach their audiences digitally.

“Out of all that, a whole new world of library video was born…. Now that they’ve seen it’s doable, successful, and fun, I think library video marketing is here to stay!” says Angela Hursh, a former library staffer who now runs a library marketing consultancy.

But you’re not in charge of the reference desk. Your budget is more than 3 nickels. What’s the takeaway for you?

I don’t want to get too prescriptive. (Readers like Andrew will stop reading.) But I want to leave you with 4 thoughts:

> Riff on what already exists (song, audio, ASMR, TikTok sounds). None of these libraries started from scratch.

> Who has your back? Great content is more about brains and risk than budget—sure. And it ALSO requires someone to have your back. Would I have liked to be a fly on the wall in the library director’s office when John proposed Curbside Larry? Yes. Yes, I would have.

> Start with audience questions (what does your audience need to know?) Layer on fun. Not the opposite.

> Debunk myths. Librarians take themselves seriously. Libraries are quiet, buttoned-up places. “Nay-nay, friends,” Larry and the Vanilla Mice sing in harmony. JUST COME ON DOWN. So: What’s the myth in your industry?

Massive thanks to Angela Hursh from Super Library Marketing and Christian Boivin from the Jacksonville Public Library and for generously sharing their insights and examples.

Previous Post: « Addressing the Elephant In the Room: 6 Strategies for Writing About the Hard Stuff
Next Post: How to Create a Smarter Go To Market Approach in 4 Steps »