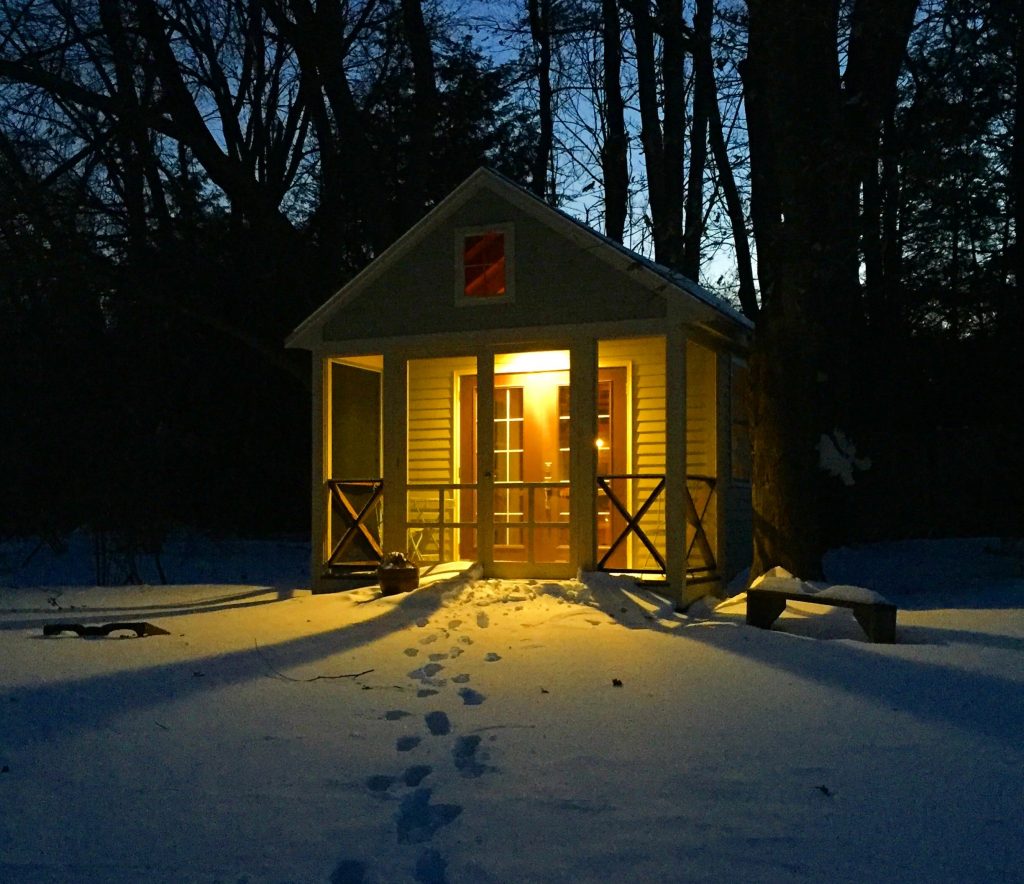 I’m writing this now from a cramped second-floor office in my house.

I’m sweating just from the exertion of typing this sentence. Even with air conditioning, it’s 450 degrees up here. I could mix a tin of muffins and set them to bake on the shelf behind me, and in 20 minutes breakfast would be ready.

The heat up here normally makes me grumpy. But today I’m giddy, because from my window I can see two electricians fishing wire to a brand-new office in the backyard.

It’s the almost-final step to completing my tiny house before I can move my entire operation there during working hours—and by “operation” I mean me, my MacBook, and Abby, a 16-pound Cavalier King Charles spaniel who—even in this heat—lies under the desk, her furry rump pressed against my foot.

(The spot on my foot where her fur meets my skin feels about 1,000 degrees. But when I move away, she nudges in again.)

The final-final step in the tiny house is, fittingly, an actual step, in the way of a giant fieldstone that the landscaper is plopping into place this week.

When I move my office tomorrow, I’m apparently joining a movement of “shedworking,” which is a thing. (Who knew?) Four years ago in the UK, Alex Johnson published a book on the subject, Shedworking: The Alternative Workplace Revolution.

The trend is gaining momentum in the US, too. Fast Company talks about how rising housing costs and shifting family dynamics, among other things, are driving the development of “micro units” on single-family lots—either as a starter home or retirement homes or sometimes as “accessory dwellings.”

They can get quite ambitious, these structures: Look how these huge timber fins splay out from this treehouse-cottage, imitating the canopy of a copse of maples. 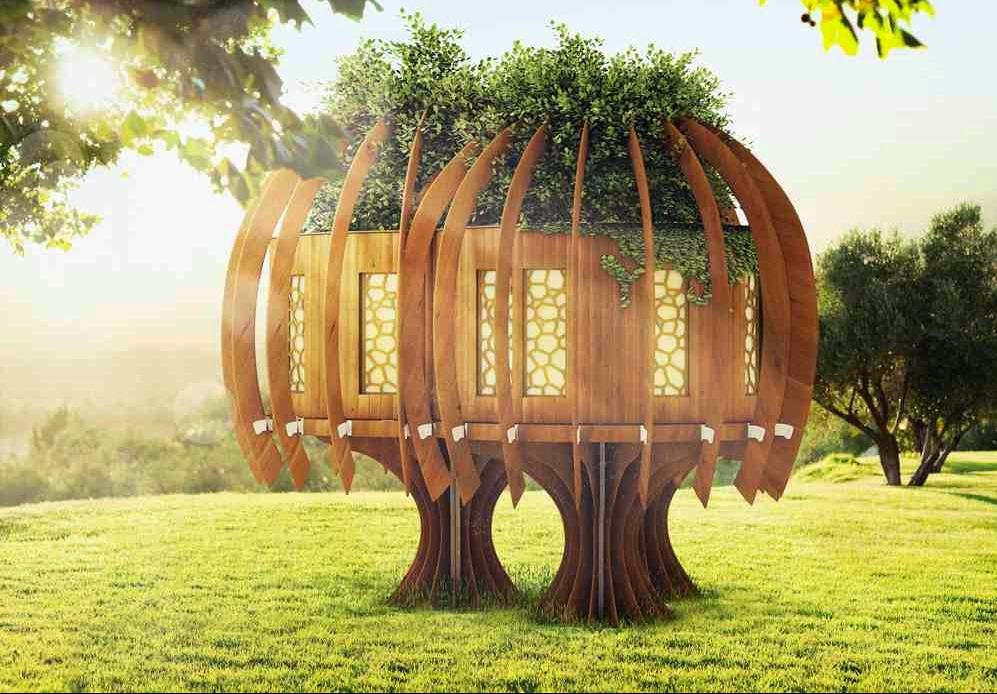 Some of these spaces are small. Some accommodate full kitchens, bathrooms—the works.

Sometimes the results are gorgeous, and sometimes it looks like someone installed a sink in a minivan and called it home.

I already live in a house I like very much, so my requirements for my workspace are more modest.

It’s a one-room building with an open ceiling and a tiny screen porch in the front, enough for a small table and chair. For the past few weeks, I’ve been gazing into the backyard and picturing myself on that porch with a glass of wine and a book when the five o’clock factory whistle blows. 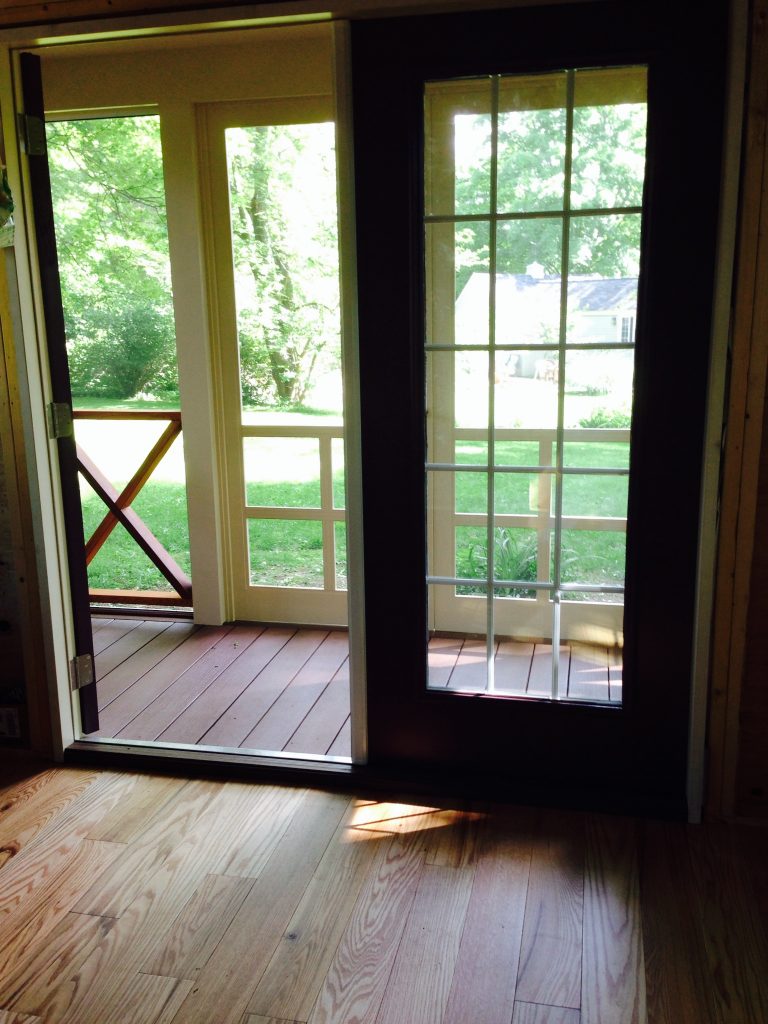 Inside, there’s a rich red-oak floor that’s what I imagine the inside of a bourbon barrel looks like. The walls are still rough for now, because you have to work in a studio for a while before you recognize what you need it to give you.

By the time the electricians leave today, the place will have heat when I need it. Along with plugs and lighting and Internet access.

It felt romantic to ban online access there—more writerly, somehow. And, in that rarified wifi-free air, I imagined myself spewing forth gorgeous text with the ease of water spilling over stone into the Trevi Fountain basin.

Perhaps I’d write longhand with a quill pen, using ink I might learn to mix myself, in a blue-stained mortar I keep casually on the windowsill.

But for real… Who am I kidding? I’d maybe half a day before breaking down and attempting to hack into the neighbor’s wifi, which I already tested the signal strength of anyway. (See what I mean?)

There’s a fine line between thinking ambitiously… and thinking that is just plain nuts.

The dark side of working from home

I’ve been working at home for a long time—for as long as I’ve been at MarketingProfs. So that’s… what, 12 years?

It’s easy to lust after all the choice parts of working from a home office—and anyone who works from home will brag about them: no commute, no water-cooler distractions, no pants. (Just me?)

But there’s a dark side to it, too, even when your upstairs office isn’t 7,000 degrees like mine is right now, with an overheated little dog igniting second-degree burns on my skin.

There’s a lot of living that goes on in a house. There are other rooms used for other things.

There are people who wander in and out, talking, breathing.  On some days I find each intake and exhale irrationally distracting.

Sometimes people stop by, ringing the doorbell because they know you are there. (You always are.) There are things in the refrigerator, and you need to swing open the door and stare at them many times a day.

All of those things tend to compete for oxygen, choking off my available supply until I sacrifice the first thing I can—my work—and then my work turns blue in the face and gasps for air, even though I know that’s scientifically not even possible to be oxygen-deficient under this sprawling suburban sky.

And anyway, I’m not sure it’s really fair—blaming others for my own weakness to block distraction. As E.B. White said:

“A writer who waits for ideal conditions under which to work will die without putting a word on paper.”

E.B. White was a wise man, and a productive writer, and he had kids, dogs, and other things breathing his supply of oxygen, too.

But also, I found out recently, he had a cottage/shack/shed of his own.

(Can you imagine anyone in E.B. White’s generation calling his cottage anything as ridiculous as a “micro unit” or “accessory dwelling”? I’m embarrassed for us just thinking about it.)

So I build my tiny house because I wanted a place like E.B. White’s, with close to nothing in it, where all the oxygen in the room would be mine, mine, mine.

A place where I could focus on work I love, and more work I love, because there’s nothing else on which to focus anyway.

Furniture: Sparse. A desk, a stool, a lamp.

Inhabitants: Two creatures (Abby and me); one machine (a MacBook).

And all the oxygen I can handle.